Emotet is one of the most active malwares nowadays, every day you can find new campaigns and new binaries. Emotet is a downloader that is able to download new modules with new features.

Emotet is also used to download third party malware on infected machines. Over the last few years Emotet has been seen distributing malware such as IceID, Trickbot and Ursnif.

All these malware have the capability to steal bank information from infected computers. Emotet consists of more than 1 botnet extended worldwide and everyone is aware of the new movements of this botnet, to such an extent that almost every day a new article talking about Emotet is published.

This repository has been created with the idea of helping the community of cybersecurity researchers and malware researchers. It explains in detail how the network communication protocol used by Emotet to communicate with the C&Cs works.

Knowing all these details, it should be relatively easy to emulate the communication, and obtain the new modules and distributed malware directly from the c&c.

That’s why in this repository there is also the code used to emulate Emotet’s communication. This code is integrated with https://www.capesandbox.com. In this way we only have to pass as argument the ID of a CAPE analysis, to automatically instantiate an Emotet bot that will try to download new modules.

Remember to install all requeriments first

For more info read this

In case of success something similar to the following will appear on the screen: 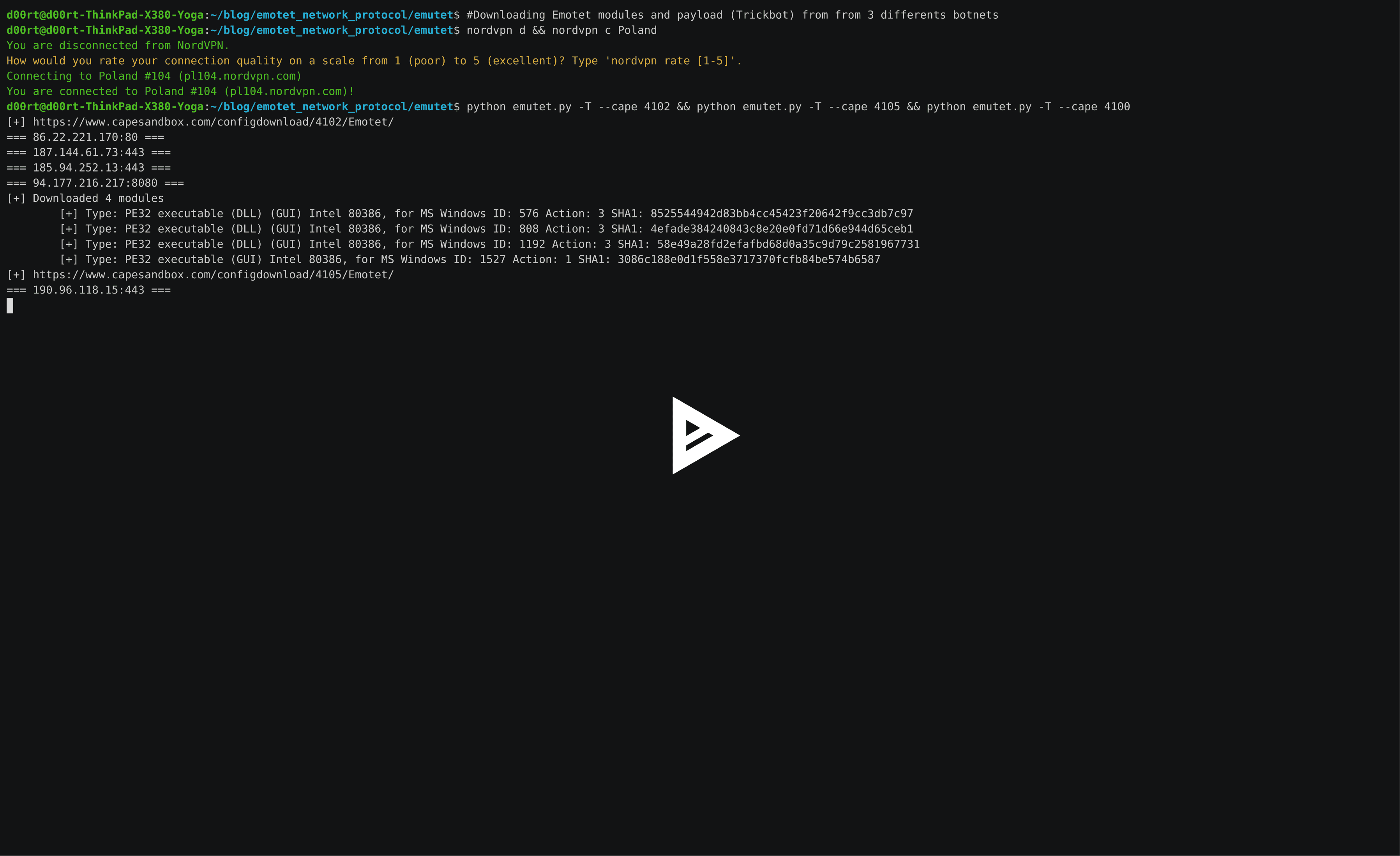 In this way it is possible to track in real time the servers controlled by the attackers and anticipate new attacks.

The following section explains in detail how the network protocol works.

Once a host has been infected with Emotet, the host waits for commands from the control panel. One important thing to keep in mind is that each Emotet binary has a configuration. This configuration has two elements:

To extract this configuration we can use tools like CAPE (https://capesandbox.com) or Triage (https://tria.ge) which extract them automatically. Or we can set up our own sandboxing environment and add the necessary processes to extract this information.

Using this list together with the public key, communication between the infected host and the control panel takes place.

If a system has been infected correctly and the C&Cs are active, the communication from the infected machine to the C&C controlled by the attackers is done in the following way.

Communication consists of 4 steps. The encryption of the communication as well as the detailed content of each packet is described in the following sections. Each step could be summarized as follows:

Below is a Wireshark screenshot of a request from a host infected by Emotet.

This capture corresponds to step (3) or step (4), Analyzing a little the response of the server you can see that it is very small, so you can guess that it has not received any module. This could mean 2 things.

In the case of receiving some module, the response of the server would be much bigger.

Some fields of the request header should be highlighted. Since probably if these fields are misconfigured the control panel will not respond correctly. This is a typical measure used by attackers control panels to go unnoticed and not raise suspicions.

This article tries to explain how this data is generated and sent/received to/from the server. Also to learn how the Emotet communication protocol works internally and to be able to create a bot that emulates this communication and to be capable of communicating directly with the control panels. (Although this emulator is already provided in this repository)

The data that is finally sent and received from the server is basically generated as shown below:

Below is the definition of these protobuf:

Requests that are sent from the infected host to the server ( steps (1) and (3) ) are composed as follows:

The server responses are built in the same way, but in this case what the server sends is a list of modules.

After encode the data, it’s encrypted as explained below.

Once the packets are encoded as explained in the previous section, the packer is encrypted using the following encryption scheme:

The encryption scheme used is similar to the one defined by GPG.

In this section I explain how I have been tracking Emotet for a few weeks since I made the bot. In this section there are technical things but also my personal opinion, because I have done this job in my spare time, I have not had nor do I have much time to devote 100% to it and everything is not technically verified. Another thing to keep in mind, is that all the tests I have done are black box, because I do not have access to the code of the servers, so in this section you will find many assumptions created under my experience that do not have to be 100% real.

Using the bot found in this repository, I’ve been tracing the different Emotet botnets for a couple of weeks and here are some conclusions I’ve reached.

As shown in protobuf definition, emotet modules have 3 fields

The collected files from the botnet that are in this repository are ordered by id and action. This way maybe someone can guess the real meaning of this id field

During these weeks of analysis, I have obtained about 600 unique files distributed inside Emotet’s botnets. Most of these files are not in VirusTotal as Emotet does not save them to disk and they are difficult to get if you don’t have a bot. The file emotet_botnet_modules_and_malware.zip contains these files. The password is d00rt-emotet.

I guess (I didn’t have time to analyze all of them) that the functionality of the modules remains the same but changes its hash. This way it is more difficult to detect them by the antivirus.

Although looking at the hash of the modules obtained there are more than 600 different modules, really, I think there are only about 13 unique modules. Simply the modules are updated to change the hash and thus bypass the antivirus.

Not all files downloaded from the botnet are modules of Emotet itself. Executable files can also be found. These files are other malwares distributed by Emotet. During the weeks the botnet has been tracketed only samples of Trickbot and Ursnif have been obtained.

The file emotet_botnet_malware.zip contains these files. The password is d00rt-emotet.

One important thing to keep in mind is that it depends on the country from which we make the request the botnet will serve some files or others. So for the tracking has been used a VPN to make the request from different countries.

Three different scenarios can happen when we connect from a specific country:

After a few days inside Emotet’s botnet I noticed the following, each bot registered in the botnet is uniquely identified by the bot_id that is sent to the server (it makes sense) and is identified in all botnets.

What does this mean in terms of tracking? Once a bot is registered in the botnet it will always receive the same files regardless of the Country from which it connects and regardless of which of the 3 knoen botnets it connects.

From that moment if you connect again with the bot id D00RT_PC from any country and to any botnet, the same modules and the same malware will always be received.

When I started to track Emotet I didn’t know this, so my first approach was to always use the same bot id and connect from all countries.

As already explained this approach is not valid … but as I lost time in making this cool map and I like it, I leave here a video :D

The correct way of tracking Emotet is to create a new bot id every time we connect to the botnet. Although this does not always work as explained in the next section and can generate a lot of noise in the servers controlled by the actors.

Problems communicating with the botnet

Even having all the knowledge of how the protocol works (from the client side) certain problems have been encountered when communicating with the C&C. Here is a list of things to keep in mind in order to make a successful communication:

The Emotet network protocol may change after this release, sorry to all researchers who will have to modify the bot. I’ve seen how the protocol has changed 3 times since I’ve been following this family, so if not for this reason they would change it for another reason.

I hope at least that it helps the community to trace this family (until the protocol changes) and that people who are starting in this world know how these advanced malwares work and how to trace them.

I want to give a shout-out to Cryptolaemus, Joseph Roosen and the group of researchers for the excellent job tracking the documents, links and binaries that are distributed every day by SPAM or whatever by Emotet actors. Also thanks to CAPE and Triage for suppoting Emotet config extractor :D

I don’t have much time to maintain this repository although I’m open to improvements and suggestions. I will try to answer questions when I can. Sorry, I don’t think I can update the repository very often. Bills don’t pay themselves.

Thanks for reading to the end and I hope you enjoyed it as much as I enjoyed doing the bot.